I started playing Total War: Britannia (TWB) in May 2020. I've always loved Total War games, but mostly they were a bummer compared to MTW1 and Shogun 2. So I'm glad to have come across another one I could really enjoy. I got it for just $11.50 in a IsThereAnyDeal.com deal.

Total War Saga: Thrones of Britannia was released for Windows in May 2018. It's the 12th Total War game, and is set in the British Isles starting in 878 CE, the days of Alfred the Great and The Great Viking Army.

There are many websites with superficial overviews of TWB stuff (lists of units, kingdoms, etc.), I haven't come across any detailed tables, spreadsheets, or equations governing how the game and its economics work.

So I made them myself via painstaking research.

Before we begin: My background with TWB

I have played three campaign games to completion so far. For all three, difficulty settings were Normal (Campaign, Political, and Battle). My first two campaigns were West Seaxe, the third was Mide.

But even if that's true, I'm sure many of these concepts still apply in a general way and lend insight into how the game works.

Also: I play for the long haul - complete conquest of every single province and kingdom. I don't particularly care for vassals or (as Mide) Legitimacy and annexation. I also don't care about fame or even trade much. Fame comes easily to successful conquerors, and trade eventually decreases to zero as you take over everything.

Gold maxxes out in two or three game decades; past that you build up ever more than you can possibly spend. But food is entirely different. This surely reflects "food technology" circa 900 CE, when it was much harder to preserve and transport food compared to today. So, here are some of the pitfalls and remedies for food management in TWB. 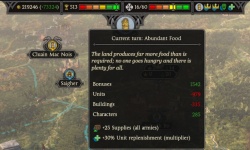 TWB tooltip of food overview in upper center of campaign screen. Mide Normal difficulty, Summer 910. The numbers do add to +513.

A major caveat for newbies is that the current turn's food level (at middle top of campaign screen) is an absolute value, but really, food should be thought of as a relative value. In other words, as a percent of total food use.

Example: 10 years into a campaign, you might have +500 food per turn, and it's a gracious surplus - you might have a total of 30 units in armies, and 10 provinces fully owned. It could be 10% more than you really need, and you're feeling really confident.

But as you get to 20 or 30 provinces highly-developed provinces, +500 food might be only 1% of what your kingdom needs. If you're hit by something like the Inertia Creeps event, with -5% food production in all regions, you're really screwed.

If you try something like lowering the kingdom tax rate, then it gets far worse - this also lowers your food income.

So here are ways to think about and deal with food income.

Use at your own risk. 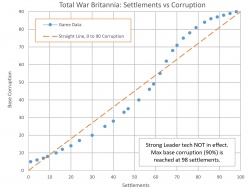 It's an S-shaped spline curve. I could try to model it with a multifactorial polynomial, but why bother ... you see it, and there it is. For whatever reasons.

I overlaid a straight 0-to-90% max line there so you can see how it varies relative to your number of settlements. Like I say, you can say a lot of things about how it works. I don't think it's bad, but I wonder why they didn't make it simple. In the end, it is what it is.

As a SUPER simple summary, your number of settlements equals your level of corruption. Until you have 98 settlements, then it maxxes out. Your baseline corruption will stay at 90% or, if you have Strong Leader tech, will max at 81%.

Caution when trying to see Corruption in game:

Bottom line: Corruption is a simple function of your number of settlements.

(But whether it is applicable to any given Province depends on the governor and any anti-corruption buildings in that province.)

1) it doesn't count any settlements (major or minor) in provinces where you don't own all settlements, and
2) some provinces have more settlements than others.

For Corruption purposes, just stick to the "settlements" count seen in <8> / Records.