When I heard the Metro series was a cousin to the great Stalker games, I gave it a holler. I bought Metro 2033 and Metro Last Light together in the non-Redux Complete Edition series in a $5 GameFly sale 8/30/14. (If any gamer is not using IsThereAnyDeal.com, you should be!)

Metro 2033 was originally released for Windows in North America March 2010. I played it October 2014. It was fun - worth the time - although a bit of a rail* and not real long.

I finally got around to the sequel, Metro Last Light, in January 2017. Like its predecessor, it was a rail game and kind of short, but still plenty of fun. Certainly worth it at a bargain price.

I found that nobody had charted specifics on the arms merchants that show up at a half dozen locations. Who knew what kind of rhyme or reason there was to what might be bought, without any sort of guide?

So, as usual, I made one. Another mf.i exclusive. You're welcome.

Or at least an mf.i original, since others are sure to copy it. It's fine to copy my stuff - just give attribution, please. If you are putting it into a wiki, put "from mikefay.info" in the edit summary every time you copy my info to other wikis. That's all I ask. Thanks!

*A rail game is one where the player has to go down certain paths (a railroad). On consoles, this means very tightly controlled player movement. In PCs it's usually more wide open, but you are playing through fairly linear levels. Open games like Skyrim and Fallout and most online MMORPGs have wide open movement. But these are rare as solo games. 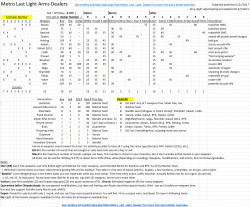 I don't want to take the hours needed to turn my Excel sheet into a bunch of wiki tables, so here it is in several forms: PNG PDF XLSX

All values are for a vanilla run-through of main MLL campaign on Ordinary / Normal difficulty.

I have the Complete Edition version bought in August 2014; it came out right after Redux, but was not Redux (so it was super cheap). I don't see a way to see the version number. Steam says I have the following DLCs: Chronicles Pack, Developer, Factions, Ranger Mode, RPK, Tower Pack, Season Pass. I did not see any changes in selection or price across a couple of complete runs with good notes, so I presume nothing changes. But it could have just been the luck of the draw, or based on my settings, or whatever.

The tables show the prices for weapons, modifications, and ammo. Also the clip size and extended-magazine clip size (if any).

Dealer Number shows the 8 dealers found in the game. If there is an X for a weapon, you can buy it from them (or get it free at the first and last dealers, 0 and 7, both in D6). Look for the yellow highlight.

All dealers prices are the same everywhere, for weapons, mods, and ammo (not counting the very first and very last levels where everything is free, both in D6). The one exception is that you can get the magnifying sight (4x for sniper rifles, 2x for others) for 35 instead of the usual 45 at the first level it appears, the Bandits level (refugee dealer on a railcar in the tunnel).

The Abzats and the RPK always had a down-pointing arrow in their vendor icon. I don't know what this means.

In theory you could have max assault rifle ammo (360) but only 60 showing in your inventory, if you had 3 RPKs with extended mags, which were all full (3x100).

The game doesn't care if you have reloaded your weapon full or not, relative to the max. You will still collect up to the max, even if there is "room" in one or more weapons' clips. So don't worry about checking your weapons for full clips if you are picking up ammo while moving fast. You'll still get everything you can, even if weapon clips could use a reload as of that moment.

The VSV is not for sale, but is a common drop near the end of the game. I back-calculated its Buy price. No one actually sells Preved ammo, so I could not get a price. You can still max out on Preved rounds at the ammo boxes at the final D6 level.

This data was a little hard to test.

If you see something that needs fixing, use Contact (upper left) to tell me. Thanks!

You can sell weapons, ammo, and even modifications to the dealers. Weapons and their mods appear to use this formula:

This is 26% to 29%; the exact value depends on integer rounding. You can see all the actual in-game values I observed at the bottom of my spreadsheet.

So it's a very hefty markdown. Many games have something like a 20% markdown; this one is ~72%.

The 3.375 reduction doesn't apply to ammo, which is on its own little schedule. (Not that it matters.)

The 3.375 is true for individual (stripped down) weapons, and for each individual modification. However, if a weapon is sold with a number of modifications, it may fetch a slightly higher price. I sold a Preved (230) plus 4x Sight (45) for 85, when INT(275/3.375) says it should be 81. I only tried this one example and did not bother to explore permutations.

There aren't really a lot of insights to be had. It's a pretty straightforward game that can be tough at a few spots until you get a feel for how it works. Then it's easy. There is usually an ideal way to do things, especially with stealth. Still, here are a few things: