Making Cash in No Man's Sky

There are tons of articles about making credits in No Man's Sky. I consider this YouTube from TerraMantis one of the best because it's more than just another qualitative list of things to do; he actually talks about rates at which you can make U, and gives solid tips along the way. We don't need yet more lists of all the ways to make money. We want to know the one best way to make money. Finding this requires a quantitative compare of all competing methods.

Like him, I found that mining and harvesting exotics are not as good as trading in stations. I went on to find a more robust way of making money than TerraMantis, as outlined below. But first a word on mining.

Here's a little table on metals you can mine. Mining's not the best way to make money. But I was still surprised that while most money-making sites talk about mining, almost none talk about metal prices. Few even say the best one (and some say a wrong one).

So here it is. The best metal to mine for profit is Emeril. It can be found in huge boulders on some planets:

When prices are compared to Emeril, the relative basis becomes obvious. Values are multiples of 13.75 (or 27.5 or 55.0, however you want to say it). Easy breakpoints relative to Emeril. It is 25% more profitable than the next-most expensive metal, Gold.

In some very brief testing of Emeril mining, I could make about 1.3 million U per hour, including trips to go sell when full. (Mining from metallic boulders, not from green crystals similar to Plutonium. Crystals would take much longer to find.) I'm not the swiftest guy; I'm sure some folks can do a bit better than this. Maybe even 2 mil per hour.

The best way to make money is through station trading - sitting in a station and buying and selling items from one pilot to another. The stationmaster can help, but isn't critical.

This can be done on most any station. But ones with plenty of traffic and better selection will be best.

I've watched three stations closely for up to an hour. Two had 13 recurring pilots, the third had 12. (Maybe there was a 13th who, by chance, didn't show up while I was watching. It's entirely possible because some pilots are extremely infrequent.) 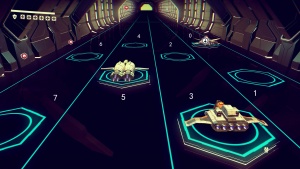 A numbering system for landing pads at a space station in No Man's Sky. Click on image and read caption for details.

Everyone's noticed that some pilots repeat. Do ship traffic patterns have useful implications?

I parked my POV and recorded two streams of visits (32 and 55 minutes). All I did was watch (record), without moving or interacting with any ships. Both recordings were at a station with 12 ships I had previously identified. Some findings: 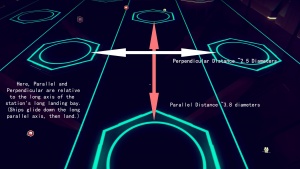 Everywhere on this page, prices are relative to you, consistent with how you see Sell or Buy in the bottom of your trading screen, unless otherwise noted.

Item pricing in No Man's Sky is fairly simple, but there are a few wrinkles:

There are important exceptions to the Buy Markup rule (+20% for items, +25% for elements).

* Actual Galactic Average Buy Prices are estimates only good to four significant digits; the fourth and fifth digits shown are guesstimates.
** Warp Cells can't be sold; this is the base value you see in your inventory.

Just so it's clear: Only these items are known to have extreme markups. The markup occurs for all pilots and stations everywhere, throughout the whole game, as far as I know.

These items can't be traded for profit, because the buy price is greater than the sell price (MUCH greater).

Throughout this analysis, "pilot" equals "ship", since each unique pilot always has the same unique ship (see above). Also, this strategy excludes extreme-markup items like Suspension Fluid and Atlas Stones.

The price scheme leads to a few conclusions for making profit:

Because items have a 20% Buy Markup, and some pilots have starred items, you can get 67% profit if you buy unstarred items and sell them starred. For example:

The key to this strategy is: first, find pilots who are starred for high-priced items, then find others you can Buy it from (unstarred). At the same station.

Then just keep bouncing between ships as they land, rinsing and repeating for as many hours as you want to make 10 to 20 million Units per hour.

For starters, target items worth more than 33k U starred Sell price / 20k unstarred Buy price. If you're so busy or fast that this level rarely fills up your free inventory slots, then lower the cut-off. If you get full too much, raise it higher or change which ships you hit. More on this, below.

There are lots of deals at every station, but finding paired items takes time (starred Sell and unstarred Buy). You can't just buy everything expensive, or you'll have to eat the 20% Buy Markup if nobody's starred for it.

Still, as soon as you see something that's starred, you can start buying it from subsequent pilots already (unstarred, of course).

That said, Dynamic Resonators (DRs) appear to be special. All three stations I tested had two people starred for it, and everyone sold it. So it is a fair bet to always buy unstarred DRs already. It is definitely possible for the station master to have starred DRs too, which gives you a great backup... if you have been wheeling and dealing and your inventory is full of DRs because no starred guys have shown up in a while, you can always run to the terminal. Usually you wouldn't, though, because it takes so long to run over to the station terminal. Profit per hour = Profit / time.

Paired items vary greatly from station to station. Not only including what's available, but also the quantity. Each pilot always has the same quantity, which varies from 1 to 4 items. So Pilot A always has 3 of them. Pilot B always has 1. Etc.

This approach takes 10-30 minutes to set up (figure out what to buy). Then you can make up to 20 million units per hour for as long as you want.

One you know all your buyers and sellers, it's time to make money.

If you keep your info in a spreadsheet, it's easy to calculate how much you can make off of pilots you buy items from. Just take the profit per item times the number of each item that they have. (You wrote down how many each pilot has, right?) Then sort or organize them according to how much each is worth. There's often a big difference between the pilot with the most to offer and the least.

If they are infrequent, remember that it might be awhile before they show up again. This is why it's really nice to have more than one pilot starred for something.

Each trade has a steep time overhead. Here's informal data from a few video-capture timing tests:

It takes 10 seconds from the time you initiate dialogue ("click on" a ship and start the little white spinning circle) to the time the Buy and Sell options are clickable!

The best probable deal makes over 20 million U per hour, and is many times better than blindly selecting pilots with very little to buy. These are extreme examples, and it doesn't include the time you would need to sell (so 20 MU/hour is probably a practical limit). But still, the point is clear: It makes a real difference who you choose when multiple pilots are waiting (and the ones you don't choose will probably leave). From your point of view, it's the same amount of time and practically identical amounts of hand waving and mouse pointing. But who it's done with makes a big difference.

Thrown into this wrinkly mess is the fact that there are steep differences in how often some ships show up. This is especially important if you can buy a lot of something, but the starred sell-to is very rare. You might trade fine for an hour, then a rare guy won't show up for two straight hours while you fume and fret over your full inventory and wasted time.

Your Worksheet for Fast Money

I did all the work for you and put together a Google spreadsheet so you can jump into high-frequency trading a.s.a.p.

Bonus tab: Complete list of all tradeable items in No Man's Sky! (though only a fraction are good for high-frequency trading)

All right then, intrepid profiteer.

In the final analysis, the amount you make per hour is a function of many things:

High-frequency trading is a game to itself, where quick thinking can be highly rewarded.

And sometimes bad luck can screw you.