After having loved XCOM back in the 90s (creepy, engaging, and sometimes thrilling), I revisited it again mid 2005, then found Ufopaedia. Starting in September 2005 I did tons of work with others at Ufopaedia.org.

This is far and away the largest amount of work I have done on any game.

This was in the mid 2000s, long before the 2012 refresh was a twinkle in anyone's eye. XCOM seemed largely forgotten then.

From September 2005 to December 2016, I contributed to XcomUfopedia.com: 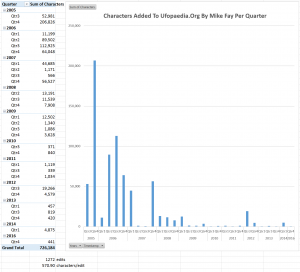 Characters added to Ufopaedia.Org by me, per quarter year

For a summary sorted by the pages I edited the most, see this.

In all, 62 original files were uploaded, 40 of them graphics: 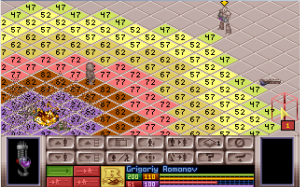 There were many, many others of note, including Pi Masta, Seb76, Spike, Arrow_Quivershaft, BladeFireLight with his XcomUtil, Hobbes, Sfnhltb, and Zaimoni. These are folks who stood out for me personally; there were others doing great work (graphics, page organization, etc), which wasn't directly involved with game discovery.

I hope I haven't forgotten anyone I should have put here!

Also, I hope I don't sound like I am responsible for much of Ufopaedia. No way! It's huge! I've only done a tiny percent. But I have done some very important work for advancing the understanding of how the 1994 game worked. 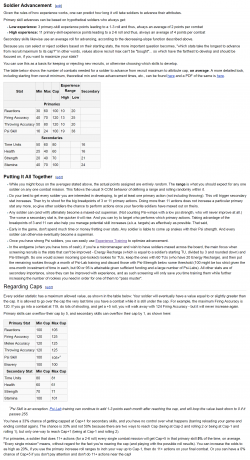 Pile those insights so high and deep you'll need a snorkel.

Ufopaedia's page on Experience was what got my attention and brought me to Ufopaedia in the first place. When I first arrived, this page was simple and vague, mainly describing what was already obvious. But I felt sure it would be very useful to know exactly how Experience works, so my soldiers could advance faster. So I began taking it apart with tons of notes.

From Sept. 6 to Oct. 13, 2005, I made the page four times as large (5,565 to 20,334 characters, +14,769), packing it densely with hard numbers on my brand new concepts of primary and secondary stats sets, showing the exact amounts of training needed for all the precise levels of skills I had discovered, detailing what the experience caps were, and what each increase in level accomplishes.

It also included over 4,000 additional words on "behind the scenes" for Experience Testing. I did almost all of this work all by myself.

All these concepts were completely novel insights which immediately translated into the Experience Training and better understanding of how every single skill worked. These experience-training precepts are now considered so basic to hardcore players that they are taken for granted. But not a whit of it existed before my work.

In the course of 38 days, Ufopaedia's Experience page went from a simple brochure to a textbook with manifold appendices.

And this was just the start of my Ufopaedia work.

Explosions and Damage modelling was another huge aspect of the work we did. This was a big team effort with all the players listed in the Colleagues section here, although Zombie and I were the main protagonists. This covered so many aspects and details, it's hard to cover them all:

Equipment in XCOM. How easily can it be destroyed?

This was a vast sprawling effort with innumerable findings leading to other findings, as can be seen reading through Explosions. BombBloke's super-cool numeric tiles (inset) were so helpful to this effort. 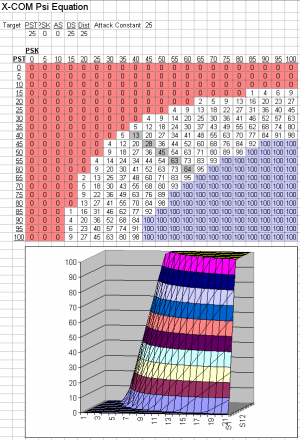 The Psionic Equations were a personal crowning achievement. Zombie and I compared notes and ideas initially, but then I did pretty much all the concrete work of that page... figured out exact calculation boundaries, then wrote up all of the equations, tables, and text. And you can see that I looked at the issue every which way, as usual (attack strength, defense strength, aliens' abilities, XCOM versus alien, alien versus XCOM, even how the official guide compared to my findings). This work bundled up understanding of this important aspect of gameplay.

Groundwork for understanding how psi skill works. Done by me.

That said, it did not reveal breakthrough insights or wrinkles. Everybody knew that ones' soldiers strength mattered, that some aliens were stronger than others, and that distance makes a difference. And it is interesting to know exactly how it works. But it doesn't particularly change how you play the game, except that you might feel more confident that you're safe with particular distances versus particular alien species.

This is as good a place as any to add that I set up the groundwork for this when I fleshed Experience Training all the way out to Psionic Skill. I performed deep sampling of how Psi Lab training works by VBA code that read results of soldiers' training directly from savegames. Only in this way did I have the high quantity of data which in turn made skill advancement crystal clear. 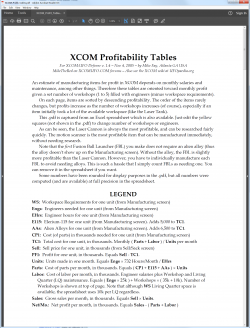 My PDF of tables on Manufacturing Profitability.

This is a topic that's near and dear to most commanders' hearts - how can I turn my bases into more funding?

When I arrived, the Ufopaedia page on manufacturing profitability had tables of numbers, but there was little explanation. For how many engineers? How many workshops? What about the cost of other components? How could we be sure the math was right, with no explanation? It was a listing of relevant (but simple) values, instead of a holistic evaluation.

I posted a serious evaluation (spreadsheet and PDF of the same) December 2005, and revisited the wiki page a number of times. While many players have contributed to this page over the years, I would like to think that my multi-faceted spreadsheet is a mainstay of this very useful page. It shows everyone every single datum and formula going into profitability calculations. 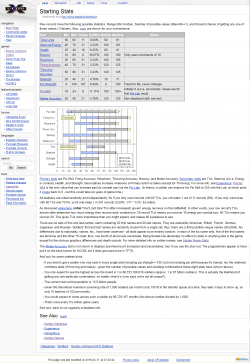 My recruit stats with bonus graphic.

I made a page of statistics on new recruits to help commanders know what they're dealing with. This topic had been covered before by others (see Zombie's good work), but there wasn't much on Ufopaedia yet. I independently sampled an enormous number of savegames of raw recruits. It nailed down info for all to see... the similarity of names and apparent countries, how frequent women are, and of course the range of values for starting skills.

This had the interesting spin-off of all the name sets for all six nationalities. It was amusing to find out later that what I had considered as two sets of English names turned out to be an American and a British set. It had gone right over my head. I guess you had to be non-American to realize the difference.

Using everything we knew about weapon and explosive damage, I modelled how many hits it took to kill an alien with a given weapon. As its Intro says: 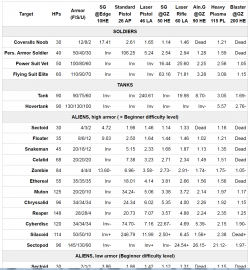 This was intended to answer the question of which weapon is best for killing aliens slowly. You want to shoot and hit them as many times as possible because you get experience for each hit, not each kill. (First you use mind control to get them to drop their weapons.)

There were 206 output rows, each one representing a million trials in order to generate statistics modelling how likely damage will occur. So that's a fifth of a billion virtual aliens dead. All in the name of science.

A lot of people have posted research data. I was a latecomer to this party. But I put together a nice table of Research information, and tried to make good overviews, such as the Progress Versus Efficiency graphic and estimates of total research time (and thus, how many labs you need).

I am not hardly the only person to work on these files, but still, I sunk tons of time into them. This included relating and showing how all the other experience and skill counters worked in these files, once we knew how they worked.

Here are items that were never completed. And probably never shall be, except perhaps in some wonderful(?) alternate reality (where they probably already have been):

If you read between the lines, that Testing page shows how we're only scratching the surface, and numerous complexities and interpretations are already arising. I also seem to recall BombBloke and I had a fundamental disagreement on how accuracy must work. It just goes to show how tough a topic it is.

UPDATE 3/30/17: In a great thread on StratCore, Bomb Bloke pointed out how he went on to do considerably more on Firing Accuracy. Wow, some amazing work! Plus see THIS for EU 2012!

As he says on StratCore, the programmers probably never figured things out like this. They just made something decent that worked good enough (like everything else in the game). After that, it was others' choice to spend countless hours trying to describe it mathematically. :)

At the time I ran the model, I could have done this very easily. But I was focussed on experience training then, seeing as how I had long before mastered the game. By the time I realized I should have also run the other model, I had moved on.

There is one consolation. The results will probably not be greatly different from what they are now. It's still the same weapons, aliens, and formulas. But one still wants to have the clarity of the best modelling.

I got involved because Zombie asked me ca. September 2008 if I could determine the area of each terrain type and/or continents, as defined in the file. In theory it was straightforward because land on the globe was a series of three or four-sided figures bounded by coordinates. But ultimately it become very complicated because of a lot of different transformations. You can see many of them discussed on Talk:WORLD.DAT, such as Map Wrap problem with WORLD.DAT and World Area and Cylinder vs. Sphere.

Ultimately, although I sank some real time into it, I gave up. Sorry, Zombie my friend. If anyone can figure it out, please do! 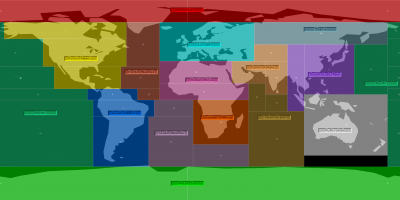 As with some other games (Civ, Stalker), I have played XCOM so much I'm not sure I can go back. It is haunting and bittersweet to review it all now. It's like a tour through a childhood town, decades later. You once knew it so well... once were king there. At least, in your own little world. But now it's... sigh. I'm not sure you can ever go back.

*"It's too bad she won't live" is from Blade Runner. It suggests things that seem not done... but actually are. Or vice versa? The final scene of Blade Runner is here. One of my favorite scenes.