In 2007, I played a lot of Sid Meier's Railroads! (SMR... the ! bang is part of the official name.) I had loved the earlier Railroad Tycoon games. SMR was different (a bit more arcade-like, being realtime) but still fun. HookedGamers.com ("Hooked") had a good SMR wiki and forum to which I contributed heavily. My work revealed a ton of quantitative details on how the game worked. I made many pages from scratch; others were little more than a brochure when I first visited, and I turned them into textbooks. 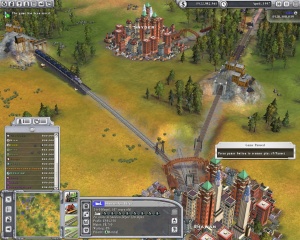 Then perhaps October 2008 – forensics are hard now – Hooked abruptly dropped SMR. Hooked itself is still there. Its SMR forum was copied to SMRSimple.com and still exists, although file attachments were lost. (I posted 139 messages to the forum.) But the wiki is gone, except for what was captured by The Wayback Machine. As always, Wayback only captured text. Graphics and files were forever lost, as was their edit history and many links to other Hooked info.

Fortunately, I kept all the graphics and files I used for the Hooked wiki (unlike Sins of a Solar Empire, sigh). In order to preserve all this work, below is the text from the Wayback pages, seamlessly restored together with my original graphics and files.

I stopped playing and working on Railroads ca. May 2007, although I kept talking in the Hooked forum past that a little. All of the Wayback wiki copies were made after that, so the text should be good.

For these pages I stuck very close to the original text copied from Wayback, not the least because I am fuzzy on the details after 10 years. A very few, obvious typo, wording, and format improvements have been done. Some links are gorked; they either go to <a gimped Wayback page>. Or they are simply <lost>. I only have the files and graphics I made or saved. And not every page of the wiki was captured on Wayback. I am the RedKnight or RK mentioned on these pages (my username then).

These are untold depths of plumbing that should not be lost. Every single paragraph, every single word, critical to mastering the game. Compare:

ORTs For All Trains

A data feeder tool was used to calculate results for the 450 possible combinations (45 Engines, 5 Difficulty levels, and 2 Lube levels). The results are shown in this Excel spreadsheet.

Check these pages out:

Here are other Hooked wiki pages that I contributed most or all of the text on the following pages. They're in adequate shape on Wayback, so I'm just linking to it, for now. They're a little messy, but had almost no graphics or files anyway. 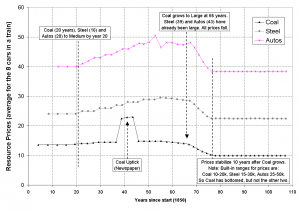 Prices for the resources over time. See Resource Growth Illustrations.

Cities
Events   This one IS completely lost! I'm pretty sure I made a pretty substantial page.
General Strategies
Glitches and Exploits
Hints and Tips
The Interface
Patents And Auctions
Real-Life Railroad Tales   partial
Speed Records and Named Trains
The Stock Market   I only did some of this, like Announcements

I've made backups. If they disappear some day, I can restore them from what I copied down.

This was a fun game, but figuring it out was even better. There were lots of rules at work right below the surface that I don't think anyone understood, until I took them apart piece by piece.

Thanks for the inspiration for another great line of games, Sid Meier!