Why care about maintenance costs? Because it can mean the difference between winning or losing, is why. If your trains become too old, the fees can creep up and then overwhelm your income, sending you into an irrecoverable downward spiral (no cash to replace high-maintenance engines), unless you do something drastic like sell stock or industries. Don't wait til it's too late... upgrade your engines when it's cost efficient.

There are two important rhythms to the maintenance fees your trains incur. But first, a word about ticks:

Now that ticks are explained, on to the schedules: 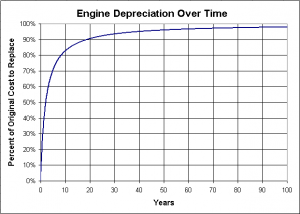 Depreciation over time for engines

where x is the age of the train, in months. This equation is 0% at 0 months (no value is lost yet as of the time you buy it), 50% at 25 months, 80% at 100 months (8.33 years), and tails off to 100% at infinity (when 25 becomes insignificant next to x). So your engines age very quickly, but still retain some value, even after 100 years (it's 2% then, in fact). If you realize you assigned the wrong engine, change it quickly. If you have the game paused (or catch it before 16 ticks are up), you can still cash in for for its whole value - as if your mistake never happened. TIV is only updated every 16th tick; a full month must pass, which is not the same as a new month showing in the game, unless you bought it the first tick of a month. Even if you don't catch it in 16 ticks, all is not lost... In the first month, they only lose 3.85% of their value (1/26th), etc.

The TIV formula has been tested in different scenarios (GB, GE, US), Difficulties (Inv., Fin., Rob.) and times (1830, 1921). None of these matter. TIV always uses the same equation. The 22 Sept. 2006 ReadMe (in your Start menu Railroads! folder) says that TIV depends on Difficulty level, but this was not found to be true.

If you are doing math based on the Maintenance Number, the equation becomes N/(N+10). There are 10 Maintenances every 25 months.

For best results, use it when a new year just started for a train, so you know the engine's precise age. If you want to add months, add e.g. January as 0/12 and December as 11/12. (New years start a whole number.)

Your results may be off by a PMI if you are right at the boundary of a Maintenance Period, and the tick marker is a little different than you think. 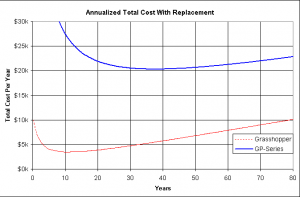 Average total costs (maintenance and upgrade) at Investor level, for Grasshopper and GP-Series engine, without Lubrication

Now for the fun part: When should I upgrade my trains?

The optimal replacement time (unless someone has a better idea!) was computed by:

Graphs of the ARCs versus time have a "Nike swoosh" curve with the following properties (see inset):

ORTs For All Trains

A data feeder tool was used to calculate results for the 450 possible combinations (45 Engines, 5 Difficulty levels, and 2 Lube levels). The results are shown in this Excel spreadsheet.

All but the earliest trains have a wide "trough" around their ORT. Due to this, I included a relaxed replacement time (RRT). This is the time when the ARC has risen to 15% of the optimal ARC. As you can see, the relaxed time is roughly twice the optimal time. It takes twice as long for maintainence to build up until the annualized cost is 15% more than at its minimum ARC. The RRT helps show how much "play" there is in the numbers.

Unlike the ORT, the RRT is not necessarily at the end of a Maintenance Period.

The ARC doubles as a precise value of what a train costs you per year. This is a critical number for optimizing your economics. Examples:

The middle and middle/late trains may look like a real boost in speed, finally getting over the 50 mph mark. But you must be able to actually do over 50 mph with full load, or the more expensive trains will not give you a bonus. So be wary of adding distance or having urba increase in size.