What isn't affected by timefall

And of course, these aren't affected by timefall:

Most everything else takes timefall damage.

All containers are the most sensitive:

Box types are easy to summarize via the tabs of the Fabricate menu:

Lastly, I'll call equipment that does not have a container boxless. It always gets timefall (unless in a covered backpack or a Bridges truck).

Boxless equipment has three dashes (---) for Container Damage, because it has no container.

This one is super easy: Material containers always erode at 7½ minutes (450 s). (Not counting heavy timefall - see below.) This is faster than anything except Order containers.

The size of the container and the type of material doesn't matter. Materials containers always take 7.5 minutes. Consider them a "standard candle" for how much timefall you've had:

You can even carry a Small materials container around as a gauge to check how much timefall you've experienced.

They're always in containers, and Order containers erode faster than any others.

They ranged from 3.5 to 7.5 minutes, with an average of ~5.5 minutes. I got data on 54 tests of 16 types of Orders; just ones I could easily grab. I wouldn't dream of trying to test them all. Nineteen results were for Order 506, a Small I could easily grab at South KC. So I'm sure my conclusions are influenced by the small sample size. But who cares. Order containers erode the fastest, and that's that.

If the Order comes in containers with two different sizes, the two sizes have their own rate, different from the other. But for a given Order of a particular size, it's always the same.

When vehicles go below 10% Durability, they will NOT take any more timefall damage. (But they can still take kinetic damage, of course.) This explains a couple of things:

Vehicles lose 5% Durability per minute from timefall. But instead of poofing at 20 minutes, they get to 9% in 19 minutes, and stay there. At that point, they can only be destroyed by kinetic damage, not timefall.

If your Mule Truck is sparking a lot, you'll be fine as long as you drive carefully. Avoid rocks and falls.

How to see your vehicle's damage level

In the game, you can't look at a vehicle and see it's numerical Durability value; all you see is corrosion and sparks. To see it as a number, go into the Map and select the vehicle.

But the Map cursor snaps to Sam, which can make it impossible to select his vehicle when he's riding it or near it.

The solution is easy: When the map cursor is on Sam, you can use Up and Down to select other things near him. Usually his vehicle is one Up from him. (Thanks, /u/NightTarot!)

Tip: If the Map cursor is far from Sam, use the Shift key to snap back to him.

But there's a wrinkle here: If you zoom out, you still see vehicle icons, but not detail tags. Zoom has to be 0.9 or lower (zoom in) to get details. (Your Mag level is shown in the upper right of the Map in faint lettering under "Online".)

And of course, don't Filter out your vehicle on the Map. Or others' vehicles, if you're in somebody else's.

Also FWIW: Mule trucks don't show Durability via the Map until you claim them (sit in it).

These are among the hardiest of items. None of them have containers except boxed Equipment.

A summary of all the details below is:

Timefall degradation rates are somewhat variable in the sense that, if you test a bunch of Assault Rifle Lv.3 (AR3s) in the very same test, they will erode at slightly different rates, almost regardless of where they are on Sam (or the ground). Each individual gun exhibits smooth linear degradation, but the rates are slightly different.

Still, they're all in the same ballpark. Exposed items (unboxed or boxless) last the longest of all, even longer than vehicles.

Honestly, it's hard to list degradation times for these, because they're all over the place. Here goes nuthin:

Were not tested much:

Guns on the Tool Rack

Being on the Tool Rack appeared to cause more timefall damage, perhaps 10 to 25% more. But a few times, being on the Rack meant less damage.

This aspect was very hard to test because, given all the variability, you need "matched pairs" within a given test for best results. For example, if I had an Assault Rifle 3 (AR3) on the Rack, I should also have at least one more AR3 on top of my backpack (and hopefully more, including on the ground) in the very same trial. This is because there's variability for individual items of the same type in a given test and variability across tests (in different bouts of timefall).

Essentially this means you can only get one good datapoint for the rack per trial (you only have one rack!). And even that, only if you also have a matched pair. I didn't realize the importance of this until writing this up, at which point I have:

So only about half of my 19 tests to date have usable info for comparing Tool Rack results.

There's another oddity about the Tool Rack:

A level 2 Backpack Cover appears to last an hour in timefall. I didn't test Level 1.

This was hard to quantify because there's only a few ways to know its precise percent damage level:

I've also seen at least one instance where a Catcher fight caused it to drop precipitously, much more than ordinary timefall would've caused. I don't know if it was because of kinetic damage (I did get slammed) or some kind of extra timefall that comes with a fight. Possibly this happens in most every Catcher fight (maybe if you get slammed). I wasn't keeping a close eye on it back then, and I don't feel like doing a lot more "test fights" just to gauge this.

Some concepts relative to variability in timefall erosion rates: 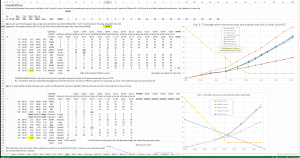 Compare the brown line for an NLAR3 (Non-Lethal Assault rifle Lv. 3) on the ground in one trial. The two ARs on the ground have the same (lower) rate as other four AR3s on top of Sam's backpack in the first episode (~1.1% damage per minute). In the second storm, the ones on the ground keep that low rate while the others increase to ~3.0%.

This is true even across a temporary cessation of timefall. These very same items - a continuation of the same test - all now had a new rate of erosion. All the new lines picked up where they left off before the interlude and were still linear (no bouncing around), but with different slopes than before. (Except if on the ground.)

The best I can figure is that when you enter timefall, all vulnerable items have an erosion factor that gets a random roll that sticks with it for the duration of that particular timefall episode.

Containers, vehicles, and Orders don't get this roll. They have a fixed rate of erosion. It differs for different Orders (usually somewhere between 4-5 minutes), but it's the same for materials containers (7.5 minutes) and most (but not all) boxed equipment.

Two times in my 19 timefall tests, I saw instances where timefall erosion was about double for some, but not all, things.

The page is already god-awful long, so I didn't want to sprinkle "twice the rate in a 2X storm" throughout the above. Consider this to apply to everything on this page, except:

These items are NOT affected by 2X storms; they have the normal erosion rate when everything else gets eroded twice as fast:

Everything else gets twice the timefall damage, including gloves, tools, all containers, even things on the ground.

I'm making some big generalities here; I don't have a lot of data. I couldn't plan or reproduce 2X, so all I have is data from what I happened to be testing when it happened. So there are only two instances of wearing skeletons during it, etc. I only happened to test one tool (the ladder). Still, the effect on anything in containers is crystal clear.

Because it affects materials containers but doesn't affect vehicles, both of which are "standard candles", you can easily use these to gauge both overall length of timefall regardless of intensity (vehicle), and amount of 2X damage (materials containers).

There are numerous indications of timefall and BTs:

Tip: You can use the Compass to see distance to BTs. You can only see them within ~35m.

Okay, there's that. Also see my section on Levels of Warning as you near BTs.

When does a 2X storm happen?

When you consider the timefall indicators and inner vs. outer ring (see preceding section), an obvious thought is that you get 2X timefall when you're past the second shocker, close to BTs and there's heavy rain.

But this was NOT found to be the case.

Of my two episodes, one was in the outer ring of light rain (just NW of entrance to South KC). The other one was in the inner ring, but not close enough to see any BTs, and the odradek stayed down (this was near the Ruined Factory, west of Craftsman).

And I did lots of other testing in the inner and outer rings, including quite a few tests closer to BTs (I could see them 21 to 28m away, with my odradek white and slowly blinking).

So, from my very limited findings, I can't see any correlation with timefall or BT indicators. Sometimes timefall is 2X (maybe ten percent of the time), but most of the time it isn't. I don't know any way to predict it or cause it (or stay away from it), and the only way I even know it happened is by tracking timefall erosion. (IOW I didn't realize it until later, when I did the calculations.)

Anyway, there it is.

And related observations. Not just for timefall, but for any type of degradation or reduction (batteries) for everything I kept notes on.

In most cases, Death Stranding warns you when you drop below a level that's easy to remember. For example, you get warned about your vehicle's health the instant it drops below 50%, to 49%. Which is fine except that it means that any time you check things because you got a warning, they're always right below a point that's easy to remember.

Vehicles show Durability, which goes from 100% to 0% as it is damaged. You get a:

If you want to know what I did, or test it yourself, here's the scoop. I've done:

Almost all the time, I would get in a Bridges Truck, plus put stuff in the truck. Mostly outside South KC because of the timefall area that's pretty close and easy (load up stuff to test at the KC and go down the road).

Also, I'd usually top off my backpack cover to 100% in a Private Room before heading out, then check it again when the test was done. Being able to pop in and out of a Bridges Truck (and recording the time out of it) meant I had a good handle on how much total exposure the backpack cover got, even though I could only get one damage-status reading on it (back at the Private Room). The Bridges Truck shields you from the variable amount (of time) you spend driving into and back out of timefall. Popping out of it and then back into the truck means the cover got as much total exposure as I recorded on the spreadsheet for other items (when I was actually out in the timefall doing the experiment).