See my spreadsheet pages titled Items, Guns, and Frags for info on these things. It also has a tab called PCCs with a complete overview of all data relevant to structures you can make with Portable Chiral Constructors.

It also has info on the Reward items for Premium deliveries, and other things you might carry (like EX grenades and MULE Boots). Basically anything you might have in your inventory except for Delivery Orders, cargo, materials containers, or other special mission items. Even the Mule Truck FWIW. It does not cover backpack accessories or modifications or anything else that's not cargo, per se.

Count of Types of Items

Here are some stats FWIW. All are from a finished Hard PC game and thus include, e.g., the Half-Life add-ins:

One of the most interesting thing is that all climbing anchor and grenade containers weigh 0.5 kg when empty of their contents.

Note that other containers like Blood Bags and Container Spray do NOT reduce in weight when emptied. They're always the same weight.

Here's some info on weight and "density" of items:

Other Various Counts of Items

Other counts of various types of items:

What Does the HG in "HG Custom" Mean?

When you bring Peter Englert (a.k.a. Higgs Monaghan) the Final Pizza, his knot leaps from 0 to a full 5 stars, and you can make 5 new "HG Custom" weapons (Assault Rifle and Non-Lethal AR, Shotgun and Riot SG, and Handgun).

But what, exactly, does the HG stand for? AFAIK, it's not explained anywhere in the game.

Here are some possibilities, contributed by helpful folks on reddit:

Frame Arms was series of original plastic robot figurines created by Kotobukiya, one of Japan's premier manufacturers of plastic models.
Each robot shares the same basic "frame architecture," with different external parts being attached to create an individual mechanoid.
The "Byakko" ("White Tiger") figure is a rare masterpiece based on one of Yoji Shinkawa's designs. The fully realized world and captivating story beind the Frame Arms series won it many dedicated fans.

Ed.: I couldn't find the text for Memory Modules anywhere on the net! So I typed this in by hand.

That's a lot of fan love! 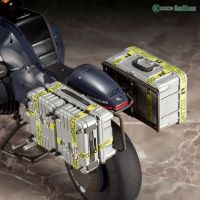 Here's a few things to put in your Inventory...

While looking into what "HG Custom" might mean, I came across:

Did you know there's a 1:12 model of this? Made by the same Kotobukiya praised in Memory Chip 1? (Sculpted by Katsuhiko Hori.)

Kotobukiya Japan doesn't seem to be selling it (I guess they supply to others), and there's a recent apology for getting a decal wrong. But you can find it at Koto Inc. (their U.S. distributor) for $75 plus $12 shipping (for me).

It's also on Amazon for $90 and probably lots of other places, too. 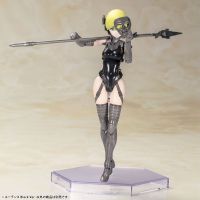 These are probably also available elsewhere. I snagged a depiction with Higg's mask.

The joints work and they have interchangeable parts, so they can be presented a lot of ways. 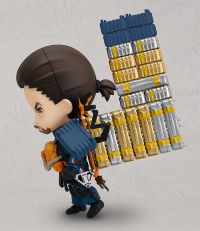 I also came across a DX Nendoroid of Sam Porter Bridges, complete with a big stack of cargo! lol

Made by Good Smile Company of Japan, Nendoroids are cute facsimiles of characters.

Frivolous_Chicken Hotfoots it through Death Stranding

/u/frivolous_chicken posted a complete barefoot playthrough on YouTube. It's a hoot!

I noticed he used a Floating Carrier to put Englert's pizza on.

Turns out it's the lightest item per SCE you can have – so he could keep the pizza level, with minimal extra weight. (The Carrier was in his pack as cargo, and the pizza was level, on top of it.) To quote fc:

I started using the carrier as a pack filler for pizzas because you almost always, if not always, get one for each delivery, and it turned out they were great for that purpose.

The Carrier Lv.1 has a Large container and weighs 1.0 kg (0.25 kg/SCE). The only thing less dense is Chiral Boots (an 0.2 kg Small), but it takes work to get them. But frivolous_chicken didn't have time for Chiral Boots, blasting through a personal challenge and finishing the game in 28 hours.