This is some rather short and simple info I was able to deduce.

Why get BB Likes?

BB will take less damage in BT fights and therefore be more resistant to autotoxemia.

You can see how many Likes you've gotten, and BB's current star level, under your Bridge Links. On your Delivery Stats tab, it's about 4/5ths of the way down. Here's a little table I made from my second game:

The ranges mean "somewhere in there". I didn't watch it while playing; it's the best I could get reloading a lot of backups. I couldn't find any other data on the net, and when I asked on reddit, nobody replied.

Maybe you can use my data to fill in gaps of your own. Or just pay close attention to messages when BB levels up a star. (You get a white text message both for full stars and maybe half stars, too – see inset.) Check your Log if you think you might've missed one. Write down the number of BB Likes. Even if you miss a level or two, at least write down what you see the next time you check... it'll help narrow ranges.

I also tried getting new star levels by playing some of the old savegames again and, e.g., using the Mirror to get Likes. Sometimes BB did, and sometimes didn't, get a star increase at the same number of BB Likes. So apparently there's variability and/or it's not directly proportional to BB Likes. Perhaps it needs something like more game time, Rests, deliveries, or maybe even plotline triggers... BB is pretty core to the story. Anyway, if a few folks try to track it, maybe somebody can tighten the ranges or even figure out how it works.

The harmonica is acquired as soon as you connect Musician, a somewhat hidden prepper in the Eastern Region. To use it, you must:

Keep calling out as you finish each verse. It only needs one tap to start each verse. There are 12 verses in total.

BB loves it and awards 1 or 2 likes per verse (1 early in game, 2 later). So, you can get a total of 12 or 24 BB Likes from a full harmonica song. It also helps heal BB. After completing a song, there's an indeterminate cool-off period before BB will respond again.

If BB was hurt when you start playing harmonica, first it heals. Once at max health, BB will start giving Likes. In this case you can "wrap around" and start the song over to continue getting Likes. But BB will zone out after 12 Liked verses, and not Like the Harmonica any more for quite a while. 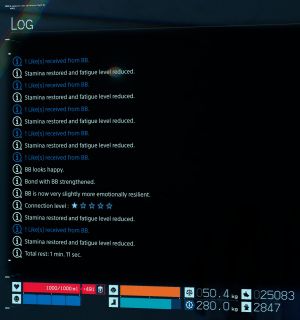 BB Likes and a Star from playing the harmonica early in the game.

I once levelled BB's connection while playing Harmonica; see log to right. I got these messages in white text:

Taking photos in the mirror is one of the fastest ways to get likes from BB.

In the Private Room, go to the mirror. Follow the direction prompts to make Sam perform an action, then, at the right time, follow the on screen command to take a photo. BB will give you 1 to 45 Likes each time.

You need approximately one hour between private room visits to get likes from the mirror. If you rest repeatedly or too soon, BB won't react.

After a session where I could get Likes, I hit the Room 8 times in a row (4 hours of game time) and never got a single reaction. But if I went outside and did a little timefall testing without any resting, I could get more Likes. I didn't hit any other knot and in fact only went about 400m from South KC.

When it did work, it seemed to need at least an hour after the previous session that got Likes, before I got more. This hour includes the half-hour that each Room visit eats up. (You can see time in the game world using Order Time a.k.a. Game Time. You can check your Orders using the map on the wall in the Private Room.)

So there's some sort of block against exploiting it. It could just be exiting the knot's perimeter or hitting timefall. It's not game-time passage because hitting the Room extra times added to game time. (Not unless they have a separate counter for game time that excludes time in a Room.)

If you're trying to test or track getting BB Likes in a Private Room, there's a helpful entry in Bridge Links called "Rests Taken in Private Room". I was doing a lot of reloading back to a previous game for other testing I was also doing, so this helped me keep track of whether I had gone to the Room or not.

Fragile Travel does not increase the Rests counter or add another 30 minutes to game time, even though technically you hit another Private Room when you fast-travel.

Other Ways of Getting Likes

Thanks to MisterCrowbar and especially frivolous_chicken for most of these

In the Director's Cut, BB will give Likes to more actions including sprinting, riding a zipline, boosting a vehicle, and recovering from a stumble. The amount of likes varies depending on what action and your connection level. At 5 stars, most actions award 5-7 BB likes and cap at 15.

In any version of the game, the cooldown for these Likes is unclear. Best practice is to be a little silly and reckless when you think of it.

Do BB Likes even Matter?

I like the little gal. She's a fun companion, even if it is a little bizarre to go mountain climbing and fighting ghosts with a baby strapped to your chest.

Still, BB's only real function is to help point out BTs. Yet even without her, you can still sneak up on and cord-cut BTs if you're very cautious. So she really only adds a little more confidence while avoiding BTs.

That said, by my second game, I mostly wanted to fight Chasers, making BB a useless ear-ache when combat started. Lou only really helped in a few places (like Edge Knot City), but even then, it wouldn't have been hard without her.

So for me, BB's just a companion that adds a little levity. But I sure could do without her bawling when events hit the fan.