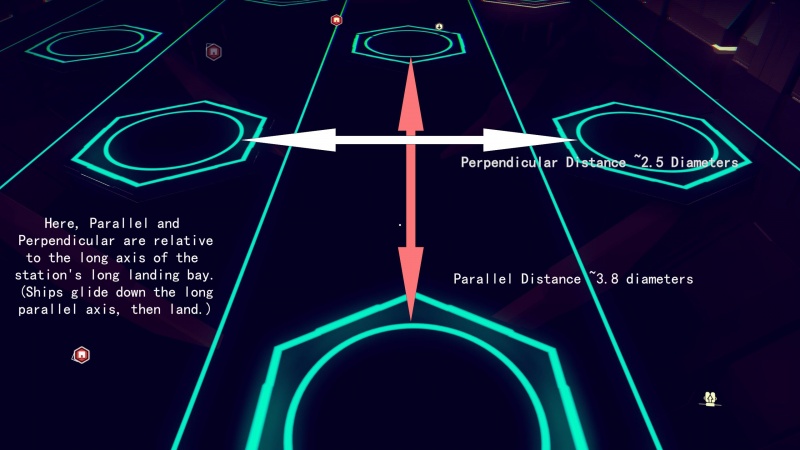 Distance between pads in the landing bay of a station in No Man's Sky. If we use the diameter of a landing pad as a ruler (outer edge of the circle, not the hexagon), pads that are parallel to the long axis of the bay are ~3.8 diameters apart. Pairs of pads that are perpendicular are ~2.5 diameters. If you are standing in the center, you block the near (perpendicular) pair. Half of this distance is ~1.25 diameters. But you don't block the others, ~1.8 diameters away. So approximately 1.5 diameters is the borderline to block pads.

The distances shown are between the near edges of the circles, exactly as shown by the ends of the arrows in the figure.

The distance was derived by capturing a video where the POV walks straight across the paths shown above, while looking somewhat downward. The video time mark (down to the frame) when edges were passed was noted. This was used as a ruler of sorts to find that the diameter of the pads (outer edge of the circles, not the hexagons) took 1.831 ± 0.019 seconds (4 tries) to traverse the circular landing pad. Using 1.831 seconds as one diameter, the time it took to traverse the other paths shown in the figure could be converted into diameters. (Does anyone know a way to get actual distances in the game?)

Apologies for the clunky graphics.

Click on a date/time to view the file as it appeared at that time.

You cannot overwrite this file.

The following 2 pages use this file:

This file contains additional information, probably added from the digital camera or scanner used to create or digitize it.

If the file has been modified from its original state, some details may not fully reflect the modified file.