I love the Deus Ex series, but although it's so cool, it's always too easy. It is an example of how it's hard to strike a balance between providing options and being challenging. As I'm sure many have done, I take down tangos three ways from Sunday non-lethally prior to hitting the next milestone. Anyway,

Here is an Excel spreadsheet of all Deus Ex: Mankind Divided item data. Every datapoint tested, except the exotic weapons with blank fields in the sheet. It's more complete in terms of showing how many slots and such, to allow for extended "what can I carry most profitably" stance. I started with data from the DXMK Wikia.

As of July 2017, I am done. If I play through again, I will try to see how much of each thing you can find. It's a fun game but probably won't happen; too much going on in life. 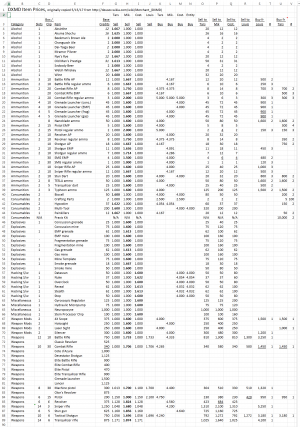 Not a lot to say here since it's so simple:

In some distant future, a clone of me would like to play this game all the way through and take notes of all the stuff collected. Then put it in my spreadsheet. For anybody OCD about getting everything, it would show which things you should concentrate on. Examples:

Yes, this is all very pie-in-the-sky because you can completely, easily win this game without firing hardly a single shot. But the sign of a good game is that people can play it all kinds of ways. The way I like to play is maximizing dropped loot. 'Nuff said.

If you have a particular weapon on you (Machine Pistol, 10 mm Pistol, whatever) and click on such a weapon, you will get ammo for it, instead of the weapon.

Said another way, *IF* you want to max your credits, don't pick up weapons that you already have in your inventory. Instead, sell or slam the ones in your inventory into your apartment's locker (and do it later), and pick up ones on the ground later. You have to sell each individually. If you get, e.g., a lot of shotguns, put them in your locker (or some other nice pile), then pick and choose individual weapons to carry to a vendor as time and circumstance permit.

Sure it's a lot of work. It's how some people play: maxxing everything you can.

Anything left on the ground poofs each time you leave Prague in the chopper. Here's how the game goes; SPOILER:

If you want to super-max your collection skills for the helluvit, do this for me:

For the record, DXMD is kind enough to consider ammo in weapons at full price to whomever you sell them to. Said another way, it is entirely your choice whether you want to load a weapon full of ammo, or not reload a weapon before selling it. Either way, you get the same amount of cash. (Not true of other games like Stalker.) I myself hold onto ammo and don't reload weapons when selling them. Maybe I can break DXMD if I get to 10,000 pistol rounds, what are the chances.

I might have bothered to make a column for "worth divided by slots" to derive a "best items to keep". But given the constraints above, it's all too simple:

I would like to repeat for everybody who will say "who cares about money in DXMD": Absolutely! You never even need to fire a single shot once to win this game very easily! Not even in the final boss battle.

This is about playing another game on top of DXMD, as it presents itself.