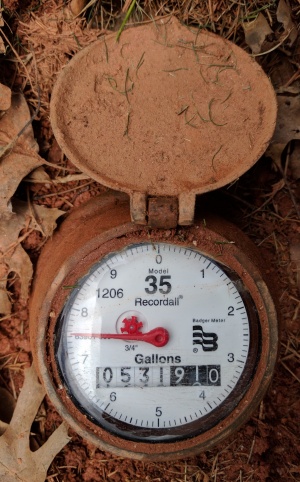 Badger water meter reading 531,917.54. They shouldn't have used a fixed, misleading 0 for the ones digit.

Never hurts to know that your water meter knows what it's doing, right? Our household spends some $100/month on water and sewage in a typical bill, so it matters. (Sewage is ~1.5 times the water used; a typical bill is $40 water, $60 sewage).

If you have a similar meter, know that the ones digit of the "odometer" is fixed at zero; the big red hand indicates ones, instead.

The little "flow finder" spinner (six-pointed asterisk) circled ~37.4 times while the overall meter registered a 3.01-gallon toilet flush. So it is ~0.0803 gallons per spin, or about 12.5 spins per gallon. It sort of jerks forward sometimes; it probably should not be considered real precise. But anyway, this is some kind of handle on what it does. One thing is for sure, it takes off if any real flow occurs. Probably useful for slow leaks (if it keeps moving when you think all your water is off).

Factoidservation: With the wife in the house and me videoing the meter when she flushed a toilet (coordinated by phone), it took almost a second for the meter to begin moving. Probably due to how a toilet tank first opens its valve and needs a moment for water to leave, before its float valve lets in more water. The water in the pipes probably also takes a little time to start moving.

In the future, I want to repeat this with a simpler round cylinder instead of the typical tall round-edge rectangular type of kitchen trashcan. It tapered a bit, and had rounded corners and bottom edges, making it hard to double-check with length-volume measures. (I would much rather have two ways of confirming my measure, than relying only on a simple $23 Taylor Model 7506 Electronic Bath Scale.)

If you're testing, two notes: